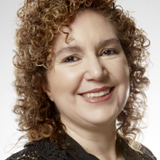 I was studying German at the University of Naples, and was in my third year, never having set a foot yet in Germany. I hated disorder, waste, and the improvising that was so typical of my hometown. At the first opportunity, I left on an Erasmus grant to study African languages in Frankfurt! I immediately fell in love with the efficiency, the rules and Teutonic order. I was supposed to stay for six months. I landed up staying for 25 years.

My first job was in a sales company, distributing chemical products: I started by doing technical translations, and ended up as the training manager for agents in Italy. Then I became sales manager for a large American publishing company. And then on to the Italian Chamber of Commerce for Germany, where I remained for 20 years, working my way up the career ladder.

I remember the thrill of my first meeting with the Italian Ambassador. This was followed by years of meetings, conferences, daily interviews with ministers, economists and top managers.

In 2008, shortly after becoming Director of the Chamber of Commerce, I had to face the question that had wide media and political coverage: the waste crisis in Campania. I had escaped from the “garbage” in my country, and now my country was calling on me to become involved. Logical. In Germany, there was the problem of a number of under-utilised waste-to-energy plants because they lacked the raw materials. A classic win-win situation. So I called the Embassy, and the project got underway, despite several difficulties and controversies. Satisfaction at the result, but also a certain distrust regarding politics and the mass media.

More recently, a meeting with Mr. Montezemolo. He had been invited to a conference, and told me: I am not coming to talk about Ferrari, but rather “Italy as a system”, that needs it. He arrived driving a grey Ferrari, with a red tie, his natural charisma and complete openness. And somewhere in my subconscious, I began to feel a kind of national pride, that I had always denied.

Shortly thereafter, I met a manager of Confindustria Bergamo (on a plane) who spoke to me about Multiconsult. I met Giovanna, who explained that they had always had dealings with Germany. I then had an opportunity to “measure up” her staff. I asked for a database to be prepared, something that in Germany would have taken a week. I got it after three days, perfect and complete. Just a few words, but a utmost respect for a promise made: these people from Bergamo are the Germans of Italy.

So I decided to embark on a new stage of my life, based in Milan. Non-governmental, free from politics, purely business. After 25 years in Germany, the time had come to return to Italy, with the “reverse” mission: bringing Germany to Italy.

New lines of business are opening up with Multiconsult. I am well aware of the merits, but also the “sharp edges” of the German market, which imposes its rules, and does not excuse imprecision and guile. But it is also a complementary market to Italy in terms of products and attitudes.

We promote Italian trade fairs, primarily those in Milan, to the German speaking markets, and we physically bring German companies through to Italy, as incoming German buyers, who are fascinated by a country market that they cannot “fathom”. Our support is decisive, not only on the sales front, but also in terms of cultural mediation.