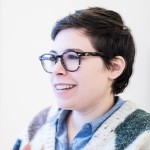 For some years now I’ve been a fan of stand-up comedy – essentially a comedian up on stage telling stories to an audience. In Italian it sometimes gets called “cabaret”, which brings to mind Liza Minelli in a bowler hat and black stockings, but that’s another story entirely.
In stand-up, the aim of the comedian, who almost has something of the philosopher, walking a fine line between the tragic and the grotesque, isn’t to get laughs from the audience. In fact, comedians are just as likely to turn an audience’s laughter back on itself, or use it as a cue for self-analysis. Stand-up is an existential exercise for comedian and audience alike.
This makes it a little bit like the job of the copywriter. I’m also trying to tell stories that function at a deeper level – that make people think, smile, or feel emotion. The copy I write looks like a monologue and I confess to having at times read it back to myself out loud to see how it sounds and check the rhythm is right.
Comedians and copywriters are both solitary jobs that only achieve fulfilment in the presence of an audience and its reaction to a punchline which – just like an advertising slogan – may prove memorable. But in the same way that getting laughs isn’t the ultimate goal of the comedian, a “call to action” should never be the main aim of the copywriter. I like to think of it instead as being more akin to an invitation to go on a second date, which the target audience is free to accept if they so choose (and of course we hope that they will).
Stand-up and copywriting both attempt to subvert received wisdom, by offering the audience something new and using language that is direct, honest – not necessarily always refined – but personal, and at the same time, universal. Something that makes the audience or reader think: “that’s exactly what I was feeling, but I didn’t know how to express it in words”.

In the words of Louis C.K., a heavyweight of stand-up comedy: “When you write from your gut and let the stuff stay flawed and don’t let anybody tell you to make it better, it can end up looking like nothing else.”