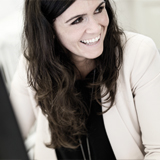 From the time of my childhood in Val d’Arno, located between Arezzo and Florence, I remember being set on recovering items and creating something new to give to people I liked as a gift. I would separate the superfluous from what was being thrown out, the labels off clothes, and wander round the house armed with old newspapers and Vinavil glue, and by the end of the afternoon, an old shoe box had become a precious jewellery case. I never kept what I made, I gave them as gifts, and to this day, I have friends that still have the “jewels” I created for them. On growing up, I studied advertising graphics, but then taught myself the old CorelDRAW on the computer. I remember the joy of getting a printer. Looking to the future, I never saw myself working for those bossy typographers in Tuscany. I dreamt of a large international agency in Milan. So I left, and found work in an advertising agency. But not in Milan, in Turin. I lived in a bohemian attic, using my wine-red bicycle to get around the city, in the rain with an umbrella. Seven beautiful years of love and work, slipping away from my boyfriend and following him: he is from Turin, he studied in Arezzo, and found work in Milan; I am from Arezzo, I worked in Turin, but I wanted to live in Milan, with him. So after seven years in Turin, once again on the lookout for the “large agency in the Milan area”, I found the agency of my dreams in Bergamo! There is potential, the Multiconsult egg will open up. My idea of communication is joyous, creativity is a gift, yes, a gift to be shared, a present, something that everyone needs, a sign of love, the raw materials of communication.